Clostridium Tetani and belongs to the genus Clostridium is an anaerobic gram-positive spore-mobile. The environmentally resistant spores are terminal (drumstick). The pathogen growing on the usual anaerobic media in the form of a lawn, wherein the culture is not always successful successful.

C. Tenani is spread worldwide, and the bacteria are commonly found in soil, but are also a small number of settlers of animal gut (especially horses). Transmission from human to human is not possible. In the Third World countries tetanus drop about one million people annually victim (lack of money for prophylaxis!). The incidence rates in Africa and Asia are at 10-50 Erkrankungen/100.000 inhabitants. Due to a lack of mandatory reporting are no exact figures about diseases in USA.

For the prevention of disease is active or active / passive immunization as recommended by the STIKO the method of choice (Tetanol PUR or Tetagam P and others). Detection of antibodies to check the vaccination status should be done especially before traveling to tropical countries, and also in severe vaccine reactions by Toxoidverabreichung, with repeated Vorimpfungen not more known times, in immunocompromised patients and in the elderly, especially with changes in the soft tissue, for example in the form of an ulcer ulcers. On suspicion of an early dose of tetanus tetanus immunoglobulin (up to 6000 IU im; Tetagam P and others) is critical at the same time must be started with an active immunization as well as the administration of antibiotics. Better than penicillin G (Penicillin-GRUENENTHAL etc.) should be metronidazole (METRONIDAZOLE FRESENIUS others) because of slower progression of symptoms and the duration of therapy should be at least seven to ten days. Resistance to both drugs is not known. Important surgical therapy are the source of infection and an intensive therapy in a quiet darkened room. A notification is not provided in the Infection Protection Act. 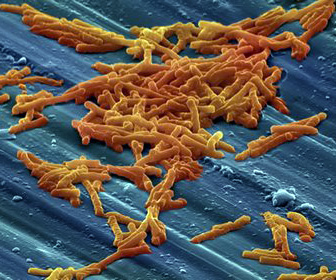 The entry of the pathogen is usually a deep injury to the skin or in connection with an intramuscular injection, they form exotoxins (Tetanospasmin, tetanolysin) under anaerobic conditions, toxin-negative strains occur. The wounds must not be open, it also suffice barely visible minor injuries. The incubation period is seven to ten days (range 1-60 days)! The pathogens produce tetanospasmin that passes through retrograde axonal transport at a rate of about 5 mm / h into the CNS. The second toxin, tetanolysin has a hemolytic and cardiotoxic effects. Consequences are an increased muscle tone, spasms of the facial muscles (risus sardonicus) with lockjaw (trismus), Dysphagia, laryngospasm, and in consequence there is continuous spasms of other muscles by presynaptic inhibition of the inhibitory synapse. It is a spastic paralysis developed with opisthotonos. The consciousness of the patient is undimmed, they are usually afebrile. Respiratory complications, such as secretions, airway obstruction, pneumonia and atelectasis lead to respiratory failure. With intensive medical therapy, the mortality rate is 10-20% to over 50%. Under the following conditions, the mortality is increased: incubation period < 8d, generalized onset, fever > 39 ° C, tachycardia > 120/min, age > 60 years first.

A localized tetanus is rare and limited to the muscles around the portal of entry. The prognosis in this form of the disease relatively well, but only if the head is not affected (mortality 15-30%). In developing countries, but also for example in Turkey, 3 sets of neonatal tetanus, a special form of the disease represents,. The Infection occurs through the umbilical wound. It occurs in the first two weeks of life as a generalized form of rigidity, poor feeding, and seizures, and the mortality rate is at 90% with no ventilation, ventilation with 10%. Classification of the severity of I-IV according to the classification Ablett. 4

A leader is a clinical diagnosis, a disease is unlikely if there is a full primary vaccination and booster doses were performed. If there is clinical suspicion of tetanus, the laboratory is essential to communicate by phone. The toxin detection in neutralization test using the patient's serum or wound material is possible in the Reference Laboratory (Prof. Rodloff, Leipzig).